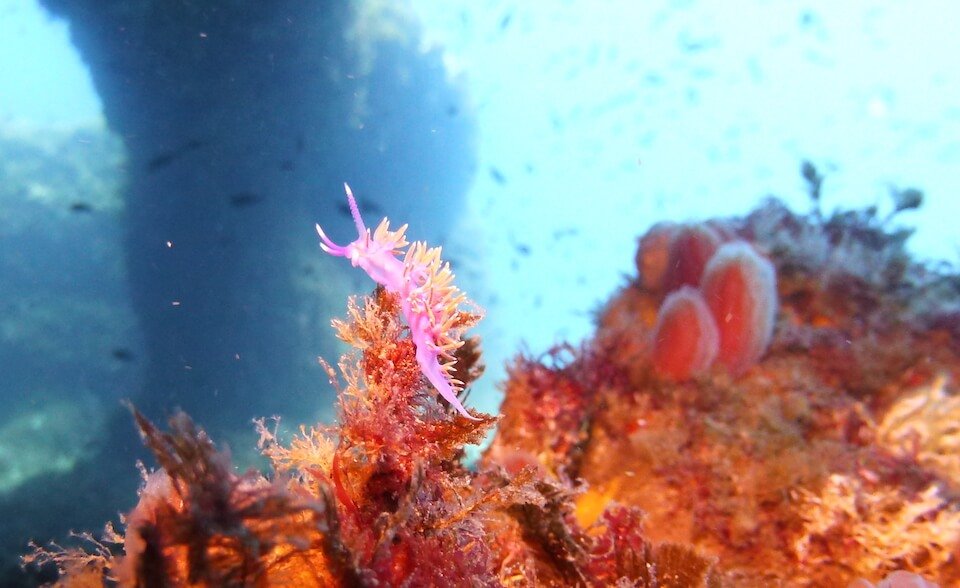 Our Dive Sites are varied and therefore offer something for everybody. Diving in Menorca might be classed as a somewhat culinary experience, as Menorca underwater is a bit of a Swiss Cheese.

Plenty of caverns, caves, tunnels as well as small crevices for all sorts of critters to hide in, can be found on every dive. In and around S´Algar, we have around 20 different dive sites on offer. All within a short boat ride from the centre.

Most of our dive sites are accessible to all levels. The best depth usually being between 10– 25m, therefore beginners and experienced divers alike will find places to explore at any depth.

There is plenty to see. If you take your time and look a little bit closer, you will find a lot of life in the form of Nudibranchs, Crabs, and other Crustaceans.

As a little side-note, it is always advisable to take a torch with you when diving in Menorca. It’s especially relevant as cracks and crannies are everywhere. As a result, without a torch, you might miss out on a lot of little stuff.

If you are more of a wide-angle – take it all in on a bigger scale – kind of diver, you will enjoy the topography underwater. Huge rocks randomly placed next to or on top of each other, make for interesting swim-throughs. Elsewhere you will find the contrast of sunlight mesmerizing, as it is finding its way through openings in a wall or cavern. Visibility usually ranges from good to very good to excellent and therefore allows you to see and appreciate the dive site. As well, it is kind of nice when you can see where you are headed. In addition, you will be able to see and communicate with your dive buddy. Hence, you can leave your buddy line at home. Same goes for the reef hook. Strong currents are not something we´ll find very often.

The dive sites we frequent on a daily basis and are easily accessible on our boats within 10 – 20 minutes, stretch from the harbour of Mahon to the East up to the Caves in Cap den Font to the West, with the Isla del Aire (the Island of Wind) to the South from S´Algar.

Our main dive boat ¨While you´re down There¨ will take us anywhere within 20 mins max. The only exception being the Caves of Cap den Font, where we tend to take our RIB ¨Boris¨ for a speedy ¨:-)¨ return.

SOME OF OUR POPULAR DIVE SITES

A whitewater reef 1km from shore that has been the bane of ships for centuries. Worth several dives for its varied grottos, chimneys and arches and the prolific fish life – as well as the chance of finding some remains of the many wrecks recorded here – 21M.

A reef leading out from the western tip of the Isla Del Aire whereby excavating in the sand, the remains of ancient shipwrecks can sometimes be found. We recently located a small cannon here and a couple of years back, one of our In-house Divemaster Trainees came back with a golden coin! The reef itself has several small grottos and is a good spot for groupers, octopus and occasionally a spectacular schoal of barracudas. 18m.

A relaxing dive next to West End Reef, where you can explore the boulders for octopus, moray eels and much more. There is a shallow inlet towards the end of your dive – 24m.

A great dive for the underwater photographer where enormous boulders lay as if thrown by giants from the lighthouse on Windy Island (Isla del Aire), providing homes for morays, congers and lobsters. Tucked in the west corner is an interesting swim through cavern entered through a horizontal crack in 9m and left by way of a grand arch at 20m. There are also two smaller caves on the eastern wall – 25m.

This natural extension to Giants Playground offers a huge rock at 5m – brilliant for your safety stop – with a few little caves and a cavern overhang under the side of the Isla del Aire, where you may see the giant conger who lives there as well as soft coral and sponges – 24m.

Fascinating twin caves set side by side in the eastern rock wall of the Isla Del Aire, one of many superb spots for underwater photography with its crystalline water, colourful marine growths and corals. If you keep your eyes open, you might recognise some Roman amphorae remains – 27m.

A natural rock pinnacle rising from approximately 27m to within half a metre of the surface, honeycombed by small caves and grottos. A natural habitat for a variety of brightly coloured fish that will happily nibble your hand and Scorpionfish who won’t! – 28m.

A breathtaking natural cavern on three levels filled with natural light, whose walls and roof are totally covered in delicate coral, bright encrusting anemones and sponges – home to grouper, moray and conger eels. A chimney to the west brings you out close to an attractive, underwater, horseshoe-shaped bay, or you can leave by the main exit to the east, following the wall to a second sandy-floored cave. If you are lucky and observant you may still find some cannonballs, musket balls and grapeshot in the sand and rocks – 22m.

Within sight of the centre, extending seaward from below the ruined 18th-century defence tower guarding the haven of Alcaufar, is this fascinating reef. The dramatic wall begins in 8m and drops sheer to a maximum of 28m, perforated by a twisting labyrinth of tunnels including a chimney and small caverns – 28m.

On the northern side of Stanley’s Drop-Off to Alcaufar. Natural extension and similar to Stanley´s Drop Off, only with more boulders and overhangs with soft coral growths. – 25m.

Three-finger reefs snaking out from S’Algar point from only 4m depth, descending to a maximum of 30m on the offshore side. The wall repays careful exploration, revealing caves, arches and overhangs and a wide variety of life including shoals of Amberjacks. An excellent dive for those without sea-legs or stomach as it’s only a 3 minutes boat ride from the Dive Centre – 30m.

A spectacular chimney system featuring two magnificent caverns with an interconnecting inner chamber. The upper grotto leads through to a wide chimney, opening at the surface in the rocky shore of S’Algar village. Descending through a passage that opens into an enclosed inner chamber, a further passage gives into the lower cavern, full of natural light entering through the massive arched entrance at 20m. Possible as a shore dive, but much more comfortable is the swift 5-minute boat journey from the Dive Center – 28m.

A very relaxing dive close to S’Algar, ideal for photography and looking at the marine life and fauna. Its name comes from a big flat rock anchor point at 6m. It has overhangs to 24 meters with large boulders and swim-throughs. An excellent site for Moray Eel spotting – 25m.

A smaller cavern found between S’Algar and Cala Rafalet, only a very short distance from the centre. At the back of the cavern is a freshwater halocline, always fairly chilly since our natural water comes from the Pyrenean snows. In a crack at the back of the fresh water, a large Conger Eel has made its home. Near the entrance is a “pool” of air where you can surface for a moment before leaving to explore the walls outside, where many octopodes can usually be found – 23m.

A cove with ideal areas for novice divers, as well as interesting spots for the more experienced. On the western side, an enormous cavern is to be seen, completely open at the surface (boats can be driven right into it), and further along this wall are several other small caves. Leaving the cove under the eastern cliffs, you can enter a fascinating labyrinth formed by huge blocks, balanced one against the other – 18m.

Towards Barracuda Point. Lots of boulders and prolific marine life and the start of the dive is underneath the tall Rafalet cliffs. There are lots of swim-throughs and great spots for seeing Pen Shells or Fan Mussels that can grow to 90cm tall. – 25m.

A small statuette of the Virgin Mary placed on a rock alter under a soaring natural rock arch in 26m of water, many years ago by Menorcan divers in memory of shipwrecked sailors. A shoal of about 200 Mediterranean Barracudas often patrols the statue, which is a truly breathtaking sight. An 18th-century cannon and anchor can be seen nearby – 26m.

A shore dive with a minibus. Set in the ideal bay of Arenal D’en Castell, this site takes its name from a large rock that has formed numerous labyrinths in the shape of a large cheese. There is a choice of many entrances leading to the main chamber where an abundance of soft corals, lobsters and octopus can be found. Upon leaving the main chamber you will enjoy a leisurely swim to the shallow waters for the exit point, where you may encounter more lobsters, scorpionfish and cuttlefish. An exciting dive not to be missed – 24m.

A cave dive for the more experienced diver. A large entry cavern at 17m gives way to a corridor paved with worn round boulders ending in a semi-circular wall. Rising up the wall and passing through a freshwater halocline you enter the inner cave at only about 3m depth and by swimming along to one side you can surface within the small cave of the Moon Pool itself – 21m.

This has to be one of the most spectacular cavern dives available anywhere. The vaulted entry cavern may be entered at two points and leads through huge formations to where one can eventually surface deep within the cavern to admire the display of stalactites and a huge stalagmite – 24m.

Only for those who have mastered perfect buoyancy and frog kick as this cavern has a silty bottom. Lots of stalactites and stalagmites to see. Very intricate, but extremely interesting – 24m.

Perhaps the biggest cavern of them all. The entry arch is so large that it is naturally lit with diffused turquoise light for the whole of its considerable length. The boulder-strewn floor leads to a sandy rise at the back of the cavern and to one side a single rock sits like an ancient offering to a forgotten marine god – 26m.

For divers with specific qualifications

Last, but not least, our two wrecks. As these two dives require a certain level of certification and experience, we´ll dedicate an own page to the wreck of Santa Clara and the WW2 Bomber Junkers88.

Other Items of Interest